Macabre Makeup #2:Bee Is For Beauty

Today's tutorial comes from YouTuber, Bee is for Beauty.  Although she's new to me, I became a huge fan after browsing her channel.  It is a treasure trove, y'all.  I noticed she seems to favor easy to find or household products, which is heaven for any budget.  i chose this tutorial because it has that element of ruined beauty I find so appealing in horror movie themes...that I LOVED nip/tuck. Enjoy!

Whether you're looking to boost your Halloween cred or up your cocktail party game, check out the Bee is for Beauty YouTube channel!
Posted by Erin B at 3:14 PM No comments: 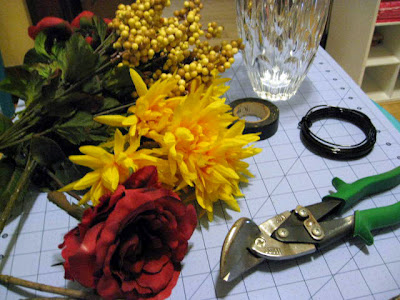 Disclaimer: Excuse my photos.  The natural lighting is limited in my house and as such my pictures turned out a little wonky. I'm building some lighting.  If I can manage to get better snappies, I'll replace them...

1.  Separate flowers by type and 'prune' them as you would if you were working with live flowers.  You may need to use your wire cutters to snip apart the factory bunches.  Loosely arrange flowers to plot out your final arrangement, if you haven't already. 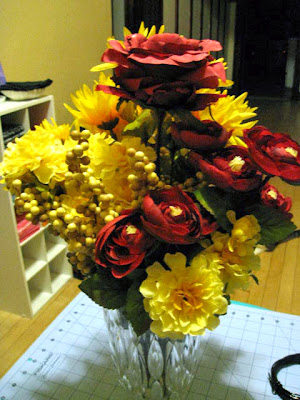 2.  Wipe stems and leaves down with a damp paper towel to prepare them for paint.  If the flowers have been sitting in your house for awhile, gently knock the blooms together to shake off excess dust. Let flowers dry fully before painting.

3.  Paint it black.  Or, you know, what ever you choose.  I'm going for a Gothic look this year, so I chose an exaggerated grayscale to play up the creepy elegance. To keep everything tidy, I sprayed one color at a time.  It made arranging easier. 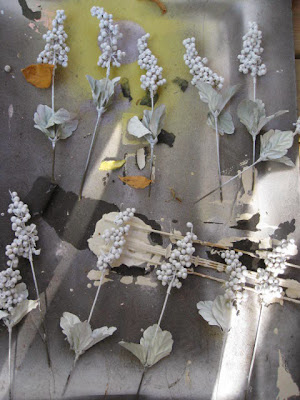 4.  Pour some glitter into a dish or tray.  Once the paint has become tacky, put on your gloves and grab your bloom.  Lightly press the petals into the glitter until you achieve the desired look.  Shake off excess glitter and let flower dry completely.  This is a great place to practice editing.  You can always glitter more flowers, but if you go to gaudy right away, there's no going back. 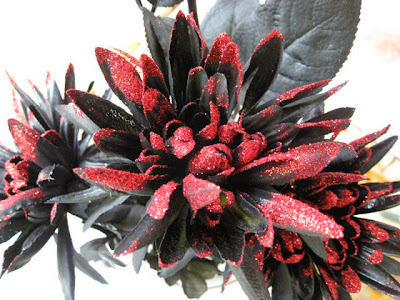 5.  Spritz dried flowers with acrylic top coat to seal paint and glitter.  This will make the flowers much more durable, which in turn makes them far easier to store.
To make jeweled branches: spray your branches along with the flowers.  Once dry, set up your glue gun and dump your glass beads into a tray.  Apply glue to the tip of a branch and turn it slowly to even out the hot glue.  Wait about 30 seconds before pressing the glue into the glass beads.  Cover glue with beads and let dry.


6.  Once top coat is dry, arrange in your favorite vase and display! 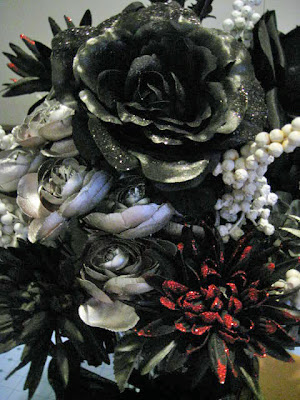 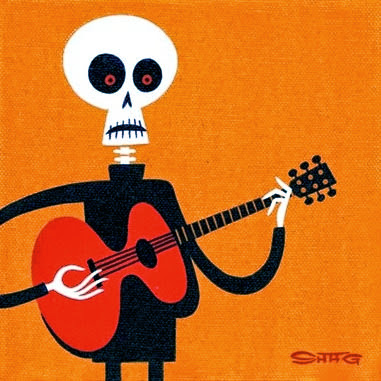 For me, there is nothing better than a horror movie with an amazing soundtrack.  Music that announces the villain, lulls us into a false sense of security, and mourns the fallen makes these movies what they are.  Parties are no exception.  Setting the mood with the perfect playlist is my favorite part of pulling a celebration together.  There is so much out there, so open up your hearts and your devices for a tidal wave of inspiration.

For those of you that need a little nudge in the right direction, I've put together a new playlist.  This year's list includes some new favorites as well as two of my three favorite pieces of classical music (You got my number one last year, in Mussorgsky's Night on Bald Mountain).

So, without any more babble from me, I give you the Goldiluxe Halloween Hit List for 2013:

O Fortuna-Carl Orff: This is the opening piece from Orff's masterpiece, Carmina Burana.  Once you hear it, you'll know it instantly.  It is a stirringly amazing piece that is as chilling as it is incredible.
Dead Man's Bones-Dead Man's Bones
This Is Halloween-Nightmare Before Christmas
Headless Horseman-Bing Crosby: Released in 1949, as part of Disney's The Legend of Sleepy Hollow, this little number is perfect for all audiences.
Castin' My Spell-Johnny Otis & Marci Lee
Zombie Dance- The Cramps
Toccata and Fugue in D Minor, BWV 565- Bach: Classic organ fugue.  Amazing.  This dynamic piece has been used in countless movies and TV shows.
45 Grave-Riboflavin'
House of the Rising Sun-Lauren O'Conell: This cover of the Animals' 1964 hit is slinky, sexy and frightening.  It blew up TV's across the and as part of the AHS: Coven soundtrack.
Devil's Right Hand-Johnny Cash
Witch Queen of New Orleans- Redbone
Halloween on the Barbary Coast-The Flaming Lips
Horror Movie-Skyhooks: Check out the video.  1975+Glamour Band+Subject Matter= Cray
Friend of the Devil- Grateful Dead
The Devil Went Down To Georgia-Charlie Daniels
Rebel with the Ghost- Sons and Daughters

Photo credit: Shag dot com
Posted by Erin B at 2:38 PM No comments:

Watching Halloween makeup tutorials is one of my favorite rainy day activities.  I've seen some really incredible things, so I thought I'd share my favorites with you.  Hopefully, these will give you a little push and through the inspiration you find along the way, you can unleash your inner character!

First up on the hit list is Michelle Phan.  She's known for putting out quality videos with clear, concise instructions and unique ideas.  I've used several of her tutorials to improve my own makeup application. Since she started releasing videos, Ms. Phan has become quite the dynamo.  I urge you to check out her You Tube Channel and website for details.  It's no wonder our first video is one of hers.

This Zombie Barbie video is my favorite right now, but overall, I think she has some of the best anime and manga tutorials on the internet...and with the rising number of anime, manga and jpop costumes Ive seen in the last few years, I think there's a lot to be learned from Michelle Phan (if it's worth doing, it's worth doing well...).

Now, for the video:


Pretty great, right?  Go check out Michelle Phan, if you're not already familiar with her.

Video property of Michelle Phan.
Posted by Erin B at 11:58 AM No comments:

Horrorween 2013: Your Source For Fright

It's October, y'all!!  It's that precious time of year when mild-mannered Americans go off in search of a healthy dose of terror.  Ah, me. October is, as you know, my favorite month of the year.  As such, we'll be celebrating all month long, right here on Goldiblog!  Get excited!

First up, TV to curl your toes: 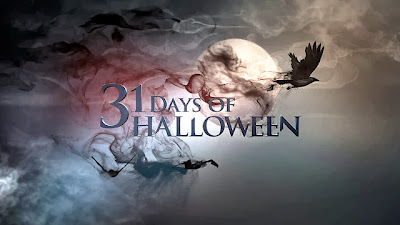 1.  31 Days of Halloween: Syfy (10/1-10/31)- From the network that brought us titles like Sharknado, Ghost Shark and Sharktopus, we have the first entry on our list.  Now, say what you will, but I am a HUGE fan of the Syfy network.  Their original movies are bananas.  I think this is a fun channel for movie lovers and especially those that support original, independently made movies.  Yes, it's true that some of them feel more like student films than blockbusters, but for the most part, the stories are unique, the acting is pretty top notch and the whole channel is endearingly nerdy.  The lineup this year is a satisfying mix of Syfy Original Movies, independent films, and titles from Hollywood. I urge you to wade through the questionable reality programs and seek out some fun.  Highlights: The Covenant, Zombie Night (10/26 starring, Darryl Hannah, Anthony Michael Hall and Shirley Jones...I die!!), and Grave Halloween

2.  Fear Fest: AMC (10/14-10/31):  As usual, I am super psyched for this one.  AMC's annual celebration of horror begins with an all day Walking Dead marathon concluding with the Season 4 premier (aww yisss!).  I cannot wait.  As I've said before, this fest is known for showing big, blockbuster movies with some lesser known titles peppered throughout.  You'll definitely run into a few repeats, but set your DVRs, y'all because this year is gonna be pretty spooktacular.  Personally, I'll be focused on catching some titles I'm less familiar with, but will of course tune in to can't miss favorites.  I suggest you do the same.  Highlights: And Now the Screaming Starts (a ghost story set in the 19th Century-a new title for me!!), Candyman (I saw this for the first time at a junior high sleepover), The Cave, Return of the Living Dead, The Howling (easily one of the best werewolf films of all time!).

3. Friday Night Spooklight: TCM (Fridays in October): This year, in place of their Wednesday classic horror movie marathons, TCM will be turning their year-round feature Friday Night Spotlight into the aptly named Friday Night Spooklight (extra points for cuteness!).  Hosted by Bill Hader, TCM will show 16 classic thrillers, Friday nights in October (starting at 8:00p EST).  I love, love LOVE TCM and am super excited to grab some popcorn, turn off the iPad and settle in for some old school chills.  Highlights: Dementia 13, A Bucket of Blood, Night of the Living Dead (the movie that started it all!), Whatever Happened to Baby Jane (this is a classic thriller starring Bette Davis and Joan Crawford-Fun Fact: Modern day starlet spats had nothing on these ladies. Their real-life feud propelled this movie to box office success amid swirling rumors of on set antics).

4.  Star of the Month: Vincent Price- TCM (Thursdays in October): Each month, TCM chooses an actor for a month long look at their filmography.  This month, the star is none other than Vincent Price.  Vincent Price (1911-1993) was born into St. Louis high society and grew up to become a Yale educated Art History/English major.  His posh voice and good looks may have served him well in the industry but it was his talent and magnetic charm that solidified his iconic status as a horror film star.  He has starred in some of my favorite films, and TCM is showing 35 of the best.  Highlights: House of Wax, Theater of Blood, Story of Mankind 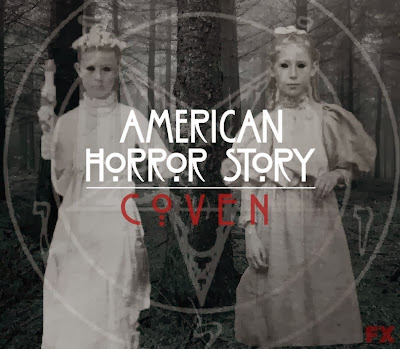 5. American Horror Story: Coven- FX (Wednesdays, beginning 10/9 @ 10:00p EST): OK, I am freaking out about this y'all!  In my opinion, the explosive series from Ryan Murphy is one of the best in recent history and I am dying for the season 3 premier.  The ad campaign is captivating, the cast is superb and the subject matter is killah!  Coven takes place during two time periods in New Orleans.  That is all I'm going to tell you.  Besides, the entirety of the horrosphere is ablaze with AHS:Coven buzz, not to mention the official trailer dropped last week.  So, if you want to know more, it's out there.  This is my favorite teaser for the show:


There you have it, dolls!  I hope this gets you thinking about hosting your own Fright Fest!  Be careful out there!
Posted by Erin B at 11:13 AM No comments: