You Asked For It: Beachy Keen

Hey gang!  Several of you have asked for more pictures of Beachy Keen.  Here you go, dolls. Some of our favorite shots from the event! 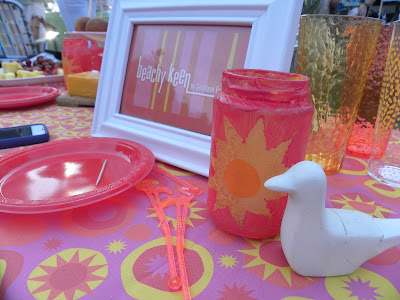 This is what happens when designers are too busy enjoying themselves to set up every shot.  I love this picture for it's haphazardly "lived in" look. 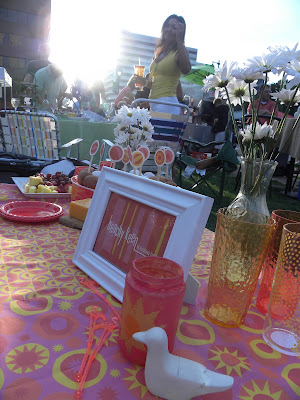 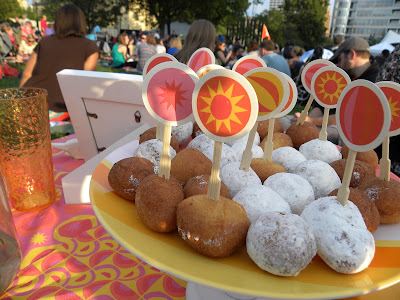 I wanted a change from cupcakes or cake pops, so I opted for doughnut holes.  I think they look like little beach balls. 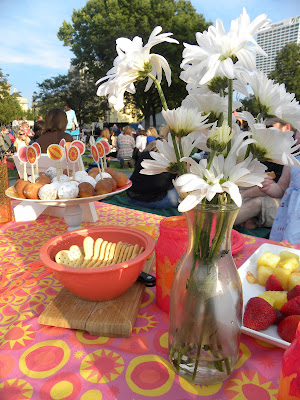 Daisies!  Such a great touch. 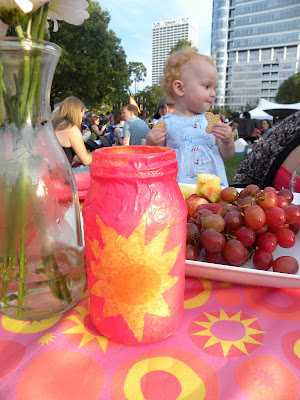 I love this picture!  This is Allison's adorable niece, giving us her stamp of approval.  Pretty stinkin' cute, right?

Another post bringing you small business realness!  I wish I could share the details with you, but since there are a few other people involved, I'll just give you the basics for now.  Oh, also.  Since I didn't think you wanted to see pictures of me looking wistfully out of a window at the rain, I thought I'd let the GoldiPets telegraph my emotional journey for you! xoxo-E

For the last couple of weeks, I have been working extremely hard on a project.  It was more of a concept or expansion  project than a design project.  I poured lots of extra hours into it and, even more importantly, I poured a lot of emotion into it.  I sketched, I outlined, I worked and reworked, I budgeted, re-budgeted...you get the idea.  After two really positive meetings (one over the phone and one in person) and a number of positive e-mails, I really thought this was to be the break I'd been looking for.  After we'd scheduled our next meeting, I left feeling amazing!  I felt brilliant, untouchable, energized and a million other things.  I immediately got started on the homework we'd scheduled for ourselves and by the next morning I had some results to share....and I didn't hear anything.  All day.  I felt like something was off.  Then, at 11:00p, I finally saw the e-mail.  It was not good.  Plans had changed and I found myself unceremoniously cut out. I was reeling.  I immediately thought of all the ideas I'd given so freely over which I would now have very little ownership.  All the plans I'd shared about my own brand. I'll admit, I had a good cry.  A whole new wave of emotion washed over me as I began to deal with this new information.  Above everything, I was so heartbroken and disappointed.

I took the evening to marinate in my crankiness and look for support from The Hubbs.  Sadly, his helpful, rational input just made everything worse, so I said, "Just let me have my feelings!"  All in all, I handled it pretty well...  The next day, after I'd had some perspective and more chats with Hubbs and a couple friends, what was said started to make lots of sense.  So, I reevaluated and I was able to pull out some positive points:

1.  Working on a new challenge gave me the chance to clearly lay out some goals that had otherwise been a little vague.  I got to see the light at the end of the tunnel, friends!

2.  I had the chance to have a frank discussion with The Hubbs about what we are and are not willing to commit to, both in terms of working relationships and fiscal responsibility.

3.  I have so much more to share with you and now I have a plan on how to do that!

Disappointment is such a dirty word, isn't it?  We're not encouraged to inflict it on other people and we spend an immeasurable amount of time avoiding it ourselves.  And when it does happen to us, we're supposed to "suck it up", "get over it" and realize, "hey, it could be worse".  Don't get me wrong, I'm not saying one should wallow in their misfortune to the extent that it clouds one's judgement.  I just think it's super important to allow yourself time to mourn your lost opportunity.  Then, once your feelings are clearer, you can pull out all the things you've learned and move forward stronger and better equipped to handle the next challenge.

In case you're wondering, her little snout is covered in pollen from devouring several flowers.  She may be a flower thief, but she's a great emotion model!!
Posted by Erin B at 10:58 AM No comments: